What Kung Fu Movies Taught Me About Photography

As a teenager with an off kilter sleep/wake cycle, I got to see a lot of old Kung Fu movies when I was up watching TV late at night.  They're corny, predictable, and the acting isn't very good - but they're always fun to watch (and usually a good cure for insomnia).  You'd be surprised what they can teach you, even about something like photography.

Many Kung Fu movies start off with a boy of no particular note, who finds out he's destined to defeat some unstoppable evil.  But first, he'll have to train his body, and his mind, to become solid as a rock.  The movie Invincible Shaolin has some great training scenes, like this one.

You don't have to do pushups with a rock on your back, but training and practice is essential for a photographer. You'll need focus and discipline, and most importantly, you're going to need a plan.

Sit down and write out a short list of skills you want to learn, and then figure out how to get that knowledge.  You can learn a lot from Google, but eventually you're going to need to start taking pictures and discovering for yourself what works.

Or, you can consider taking a photography class, which leads us into the next lesson that Kung Fu movies taught me.

Old Guys Can Kick Your Ass

Old Masters are always given a lot of respect in Kung Fu movies, and with good reason.  Though they may be old, they're still fast and strong, and more importantly, they always seem to know where the next punch is coming from.  Since they can predict your next move, they're always one step ahead. 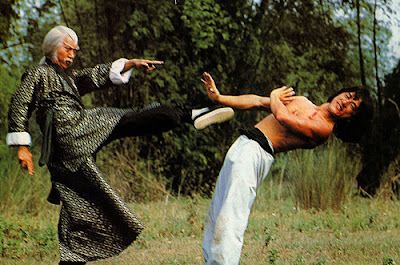 New photographers can learn a lot from old hands.  They've been thinking about photography for a long time, finding out what works and what doesn't, and you can learn a lot by listening to their stories and looking at their photographs.  Taking a class from one of them, or just finding a mentor, can take your photography to a whole new level.

Eventually, You're Going to Get Kicked in the Face

The hero in a Kung Fu movie always gets his butt kicked at least once, so that the audience has some doubt about whether or not he'll be able to win in the end.

You're going to go through the same thing sooner or later (hopefully just metaphorically).  You'll drop that expensive piece of equipment, you'll miss the perfect shot that you can never recreate, you'll get told your photos are no good.

Just remember, it's not that hero's never get beat up - they do.  But they always get up again.

The Good Guys Always Win in the End

Which brings us to our last Kung Fu movie lesson.  Their girlfriend's been kidnapped, their town burnt to the ground, their father/teacher/ancient master has died - but the hero of the movie makes it to the end, defeats the bad guy, and saves the day. Every. Single. Time.

Learning to become a great photographer takes time, and there are no shortcuts.  It takes practice, study, and hard work, but it is an achievable goal.  Don't try to become a master overnight.  Instead, set a few short term goals on how to improve your photography, and work at them.

And in the end, you'll be one of the Ancient Masters.

get updates (it's free)